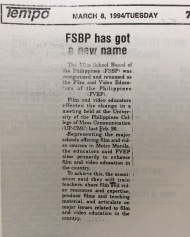 Film and video educators effected the change in a meeting held at the University of the Philippines College of Mass Communication (UP-CMC) last Feb. 26.

To achieve this, the association said they will train teachers, share film and video resources and expertise, produce films and teaching material, and articulate on major issues related to film and video education in the country.