Filipino lead actor of Heneral Luna, John Arcilla, assures moviegoers that they “can experience entertainment and beauty in historical films just like they would in romantic comedies.” In fact, he says, “they can get even more.”

The “more” he refers to is that moviegoers can broaden their taste for film viewing. While he does not discourage watching horror movies and romantic comedies, he does warn that “too much of these escapist films can also kill citizens’ critical thinking just like too much siesta and coffee can be detrimental to ones health.”

In Heneral Luna, moviegoers will see another “more”. Arcilla says the audience will see him as a Filipino citizen first before as an actor,

“when I did this film I truly asked the bigger purpose of my work: what can I give to my countrymen more than just entertainment? I always tell myself — before an actor — i am a citizen of this nation. I participated in Heneral Luna not just as a movie actor in a project but as a concerned citizen in a nation whose history needs to be told, and more so, needs to be healed.”

Aside from Arcilla, the entire production team has elevated their work to greater purpose as evident in the movie.

In the following videos, the producers have also produced movie collaterals that will aid promote history as entertainment 1) a book detailing and interview of Antonio Luna scholar Vivencio Jose and 2) a lecture by U.P. Manila History Prof. Alvin Campomanes about the man and the movie. Campomanes has been actively promoting the movie saying that FILIPINOS SHOULD BE DISTURBED!

UNDERSTANDING ANTONIO LUNA IN PEACE AND IN WAR

HENERAL LUNA: THE MAN & THE MOVIE

Students & teachers will be given 50% discount. 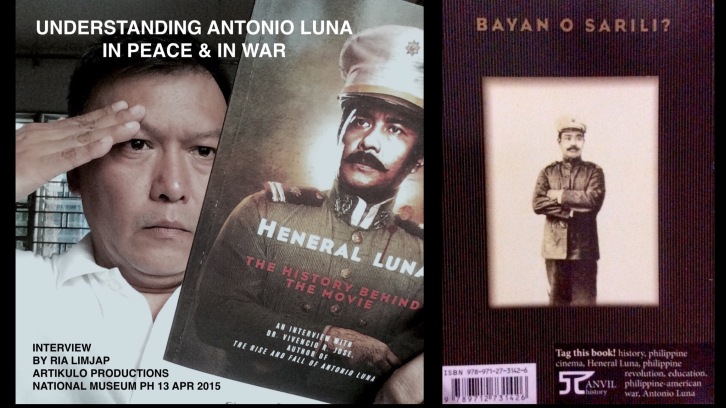 A Fresh Talent to Watch (6/29/2016) - His plan now is to direct independent and mainstream TV and film productions.

DISPLAY YOUR SHOES AT THE MARIKINA MUSEUM (6/28/2016) - Why not? After all it's not just your shoes that will be remembered but more importantly, your contribution to history will be cherished...

educators free screening herMano puli (8/15/2016) - A historical drama film about Hermano Puli—the revolutionary legend of Quezon we know little about. Be among the first to watch this important film for free!

filipino actor: history can be entertaining (9/8/2015) - Filipino lead actor of Heneral Luna, John Arcilla, assures moviegoers that they "can experience entertainment and beauty in historical films just like they would in romantic comedies." In fact, he says, "they can get even more."

filipino farMers’ plight on filM (7/17/2016) - The first-ever ToFarm Film Festival Philippines, featuring 6 films ---‘Pilapil’ ‘Pitong Kabang Palay’ ‘Free Range’ ‘Kakampi’ ‘Pauwi Na’ ‘Paglipay’ --- that aims to dramatize farm life through a variety of film genres including drama and comedy, as well as thriller and fantasy are being exhibited until July 19, 2016

FREE SCREENING OF HENERAL LUNA FOR EDUCATORS (8/24/2015) - Sucesos Filipinas invites educators to a free advance screening of Heneral Luna on August 26 12:00 - 4:00 PM at the Little Theater, College of Arts & Sciences, University of the Philippines, Manila.