The Philippine Revolution of 1986 may not have culminated the way it did had it not been for the man who moved it first on August 21, 1983. His name is Agapito “Butz” Aquino, a movie actor and businessman turned people power advocate when his brother Sen. Benigno “Ninoy” Aquino, the staunch opponent of President Marcos, was slain on August 21, 1983.

He organized street marches and called for the restoration of democracy in the country. He led the precursors of EDSA Revolution — the August Twenty One Movement (ATOM) and the BANDILA (Bansang Nagkakaisa sa Diwa at Layunin). Butz is the first businessman who publicly called for the ousting of the president. Leading his ranks were business people whom he considered as more effective protesters. He said that “50 well-dressed professionals speaking against the dictator is more effective than 50,000 students storming Malacanang.” 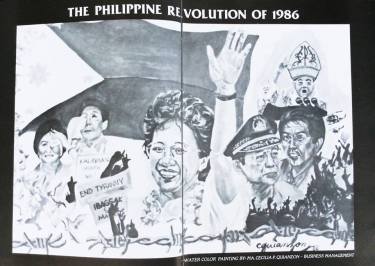 In less than three years he found himself in the dawn of a revolution. He was partying on February 22, 1986 when news broke that Gen. Fidel Ramos, then AFP Chief of Staff, and Gen. Juan Ponce Enrile, then Defense Minister, resigned their posts and were refuged in Camp Aguinaldo and Camp Crame. Recognizing the seriousness of the event, he stopped partying and proceeded to offer help to Ramos, “we want to help but we don’t have weapons; we only have people.” Fearing an attack from Marcos, Ramos requested for civilians to guard all the gates.

Luckily there was a Radio Veritas reporter covering the event and through this channel, Butz made the first call for people power. He called on all ATOM and BANDILA members, all Socialist Democrats, all who would listen, to gather in Cubao. From there, together they will march to Camp Crame and provide civilian protection for the defecting military officers.

Police teams led by then Chief Alfredo Lim instructed Butz and party to disperse. Butz said to Lim that he will only follow the command of Ramos. Lim called up Ramos and the general confirmed that his order is for Butz to stay. By 10:00 AM the following day, around 50,000 people were guarding the gates. Afterwards Manila Archbishop Cardinal Sin, made his radio broadcast for the faithful to follow suit. The rest is the first bloodless revolution, the first civilian-backed coup d’etat in world history.

Butz became a legislator since that time and to his credit is the Magna Carta for Small Farmers and the Cooperative Code of the Philippines. He did not participate in EDSA 2 but he recognized it as legitimate because it had the support of the Constitutional Military. He noticed that the fervor for the 1986 Philippine Revolution has waned and that there is a need to deepen political maturity among Filipinos (even for himself); that there should be a longer term goal than just ousting a dictator.

Sad that his death came four days before the 32nd death anniversary of Ninoy Aquino. His own words best describe the man who moved August 21, 1983 to February 22, 1986: Agapito “Butz” Aquino is an “idealist tempered with practicality.”

Thank you for your piece on Butz. Butz was a friend. I admired his zest for life. I was blessed to be with him in FSDM and Bandila. I served him as his political officer during his first term in the senate. His boombastic laughter will be sorely missed.